"It's Bigger than Christmas": Thoughts on the Significance of the Super Bowl in Prison

[Note: A version of this essay was originally posted at www.gibson-light.com] 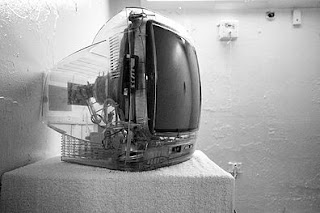 Last Sunday, millions of men and women around TVs everywhere watched the Patriots and Falcons compete in Super Bowl LI (51 to non-Romans such as myself). Many of these viewers followed from behind bars in US prisons. Indeed, during my 18 months in "Sunbelt State Penitentiary" (SSP) – the anonymous state prison where I conducted observations and interviews for my dissertation research – I learned just how central the NFL season and the Super Bowl in particular are to prison life. Here, I will share four insights into the power of football in the American prison (a lens through which we might catch a glimpse of other pressing prison concerns, such as diminishing services, economic inequality between the disenfranchised, and the alienation of the prisoner population).

1. Somebody Got a Big Payout
Like many a corporate office or friendship circle on the outside, prisons are home to competitive football pools. Behind bars, however, where cheap, durable food items have become the de facto money of choice in response to downturns in institutional food services, the incarcerated cannot easily bet with cash. Instead, at SSP, prisoners wagered packets of ramen noodles. Following the exciting comeback of the Patriots, the big winners collected the pot: a sweet stash of delicious and valuable soups.

With their newfound ramen bounty, these pool winners can purchase a variety of goods and services in the underground prison market. For instance, they can buy contraband fruits and veggies (smuggled out of the kitchens), clothes or other necessary wares from others looking to make a quick buck (or quick "bite" in this case), or arts and crafts goods (called "hobbycraft"), such as portraits or birthday cards, which they can mail to friends or family on the outs. Or, they can pay more entrepreneurial individuals for services such as bunk cleaning or laundry for a reasonable ramen fee.

2. Time is About to Slow Down
In prison, the biggest struggle is often that against time. This world of slow monotony can be more than challenging for its captive residents and they will resort to many means to help time slip by faster. One common strategy is to get a job. Many participants in my research discussed their prison sentences in terms of their prison work histories – X through Y months were spent in one work program, Y through Z at another. And getting lost in one’s work is not unique to the outside world. Many seek out the busiest, most physically or mentally engaging work in an effort to lose the hours of the day in the rush of the work week. Whereas many workers in the free world “live for the weekend,” many prisoners “live for the week,” dreading the long Saturday and Sunday hours when they must sit in their bunks or shuffle around the yard.

However, football season offers a perfect distraction from the typical drag. It was a common refrain at SSP that “once football season starts, time flies.” The entertainment of watching and rooting for a favorite team is a common enjoyment for the imprisoned and the free. Behind bars, however, it can also represent a lifeline amidst years of incarceration, distance from family and friends, and alienation from the workings of the outside world. In addition to helping speed along the day, the ritual of watching football helps connect the incarcerated to the rest of the world in some small way. These types of connections may be vital to coping with life behind bars. Now that the season has ended, it's back to prison as usual.

3. Not Everyone Gets a Good Seat
In some prisons, shared TVs occupy communal spaces. In such institutions, informal rules may dictate which individuals or groups are allowed prime seating (and when). In other prisons, such as SSP, prisoners must instead procure their own entertainment systems. Small TVs – like those that people on the outs might find at Walmart for $50 – cost hundreds of dollars in the prison commissary store. Such goods are all the more unattainable for the majority of men who make below $0.20 per hour for their labors in prison work programs.

Financial help from family and friends on the outside (often in need of financial assistance themselves) is rare for many on the inside, who must instead hustle and save if they hope to deck out their bunk with a television, portable CD player, or other approved entertainment device. For the select few who manage to secure competitive higher-paying jobs in penal labor sites (which can pay closer to $1.00, $2.00, or $3.00 per hour at some sites), saving may not be as much of a burden, relatively speaking. The rest, however, must rely on the good graces of their pals or neighbors in their housing units, who might allow them to sit in their bunks to watch the game. While it is possible to purchase a TV directly from another prisoner in the black market, this form of exchange is technically prohibited – those caught with entertainment items registered in another’s name face having their goods searched and confiscated, disciplinary tickets, Loss of Privileges, or other sanctions.

4. The Super Bowl is the Biggest Holiday of the Year
Despite the issues listed above, this year’s Super Bowl Sunday, as in past years, was the biggest holiday of the year at Sunbelt State Penitentiary. On this day, these men received a special meal in the chow line (last year it was roast beef sandwiches with actual tomatoes and onions, which was a big deal in an institution where any fresh vegetables are valued “like lobster”). Prisoners are served dinner early on Super Bowl so that they can eat it while they watch the game – a rare allowance of autonomy in a space in which every movement and activity is surveilled and controlled.

It is, in the words of one participant, “bigger than Christmas” and more people turn up for Super Bowl chow than for any other holiday or special occasion. That means that last Sunday, far more prisoners than usual ate the state-provided meal and did not turn to the formal or informal markets (via the prison commissary store or the underground ramen economy, respectively) to procure food that was healthier, tastier, and more filling than what the institution offers (in the words of incarcerated and staff member participants alike).

Monday, the off-season began. As we on the outside returned to routines as usual, the men and women in the nation’s penal institutions still face a range of issues. Economic disadvantage, stratification between prisoner groups, unequal access to goods and services, poor quality of food, and other hardships remain facts of everyday life. These and other aspects of the state of US prisons are unlikely to improve under the current presidential administration. Regardless of which team you root for (in athletics or politics), the conditions faced by the millions of Americans behind bars are in need of our attention. 95% of the currently incarcerated will one day return to their communities. Let’s hope they come back having gained more than just fond memories of the Super Bowl.


(Michael Gibson-Light is an ABD student at the University of Arizona School of Sociology. His dissertation entails an 18-month ethnographic study of the structure of penal labor, the practices and strategies of working prisoners, and the formal and informal economic outcomes of work behind bars in a US men's state prison. More information can be found on his personal website.)
Posted by Michael Gibson-Light at 10:42 AM

Have news to share, articles/books of interest, new research? Email us at punishmentsocietyblog-at-gmail.com!

Are you a criminologist or a sociologist? Introduction

Punishment and Society (P&S) is an interdisciplinary field of social science inquiry into punishment as a social institution. P&S sc...