The NYU Press recently sent out an ad for its Criminology-related titles in time for ASC. A number of these will be of interest to Punishment & Society scholars. Here is the full list, and specific comments follow below. 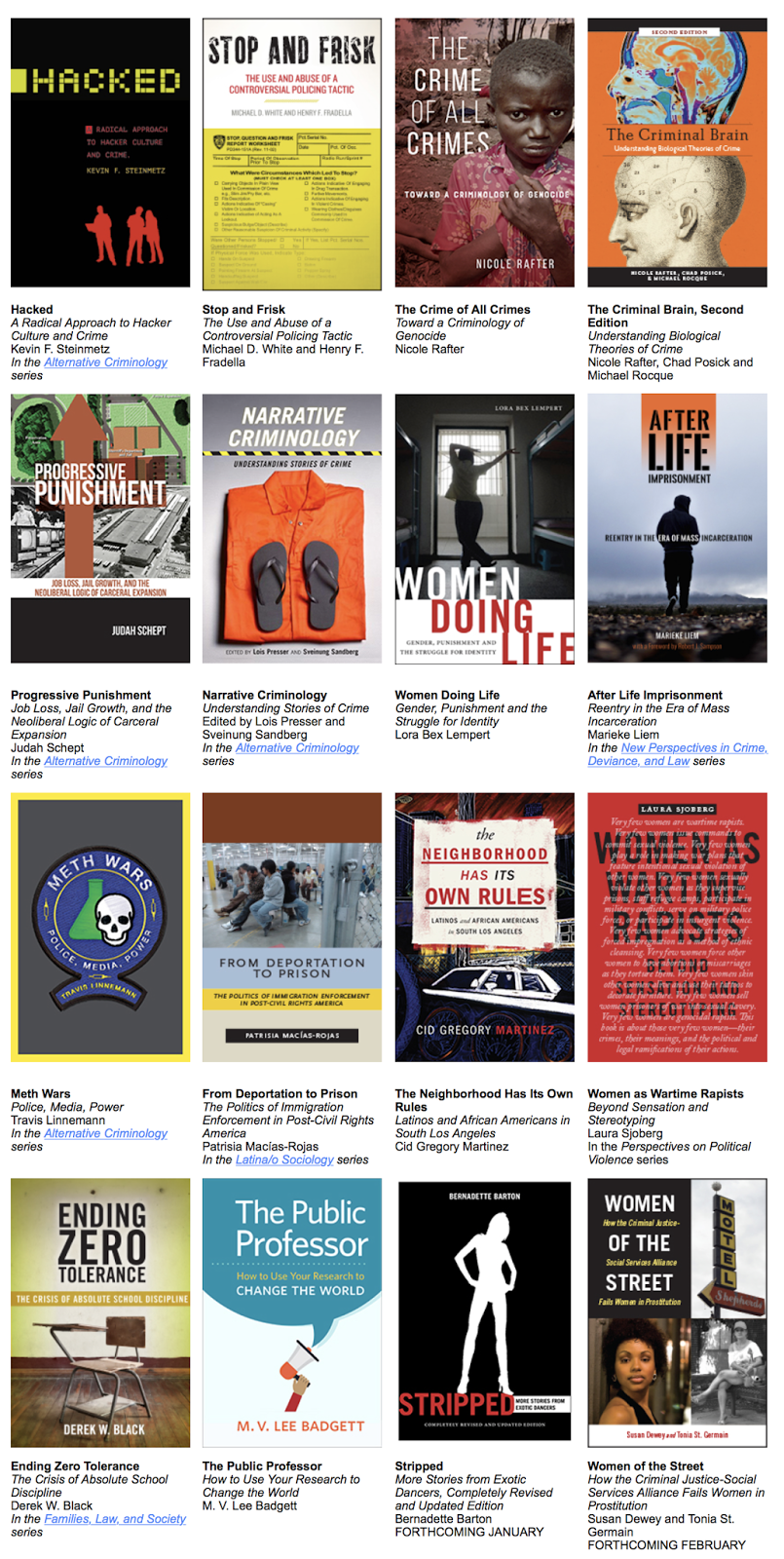 While there are many really interesting sounding books, here, two may be of especial interest:


The growth of mass incarceration in the United States eludes neat categorization as a product of the political Right. Liberals played important roles in both laying the foundation for and then participating in the conservative tough on crime movement that is largely credited with the rise of the prison state. But what of those politicians and activists on the Left who reject punitive politics in favor of rehabilitation and a stronger welfare state? Can progressive policies such as these, with their benevolent intentions, nevertheless contribute to the expansion of mass incarceration?

In Progressive Punishment, Judah Schept offers an ethnographic examination into the politics of incarceration in Bloomington, Indiana in order to consider the ways that liberal discourses about therapeutic justice and rehabilitation can uphold the logics, practices and institutions that comprise the carceral state. Schept examines how political leaders on the Left, despite being critical of mass incarceration, advocated for a “justice campus” that would have dramatically expanded the local criminal justice system. At the root of this proposal, Schept argues, is a confluence of neoliberal-style changes in the community that naturalized prison expansion as political common sense among leaders negotiating crises of deindustrialization, urban decline, and the devolution of social welfare. In spite of the momentum that the proposal gained, Schept uncovers resistance among community organizers, who developed important strategies and discourses to challenge the justice campus, disrupt some of the logics that provided it legitimacy, and offer new possibilities for a non-carceral community. A well-researched and well-narrated study, Progressive Punishment offers a novel perspective on the relationship between liberal politics, neoliberalism, and mass incarceration.


From the hit television series Breaking Bad, to daily news reports, anti-drug advertising campaigns and  highly publicized world-wide hunts for “narcoterrorists” such as Joaquin “El Chapo” Guzman, the drug, methamphetamine occupies a unique and important space in the public’s imagination.  In Meth Wars, Travis Linnemann situates the "meth epidemic" within the broader culture and politics of drug control and mass incarceration.
Linnemann draws together a range of examples and critical interdisciplinary scholarship to show how methamphetamine, and the drug war more generally, are part of a larger governing strategy that animates the politics of fear and insecurity and links seemingly unrelated concerns such as environmental dangers, the politics of immigration and national security, policing tactics, and terrorism.  The author’s unique analysis presents a compelling case for how the supposed “meth epidemic” allows politicians, small town police and government counter-narcotics agents to engage in a singular policing project in service to the broader economic and geostrategic interests of the United States.

Posted by Ashley Rubin at 7:37 AM No comments:

Have news to share, articles/books of interest, new research? Email us at punishmentsocietyblog-at-gmail.com!

Are you a criminologist or a sociologist? Introduction

Punishment and Society (P&S) is an interdisciplinary field of social science inquiry into punishment as a social institution. P&S sc...